Over the past 15 years or so, a collection of five giant biotech corporations — Monsanto, Syngenta, Bayer, Dow and DuPont — have bought up more than 200 other companies, allowing them to dominate access to seeds.

The takeover has been so dramatic that it is becoming difficult for farmers to find alternatives. As a result, in the U.S., 90 percent of soybeans are genetically-modified, and many conventional farmers have trouble obtaining non-genetically modified seeds.

According to The Ecologist:

“… [O]ne solution to restricting their control would be through banning the practice of granting patents on seeds, plants and genes. A patent gives a company exclusive rights to sell and develop a new invention. In the case of patents on plants and genes it grants them temporary monopolies and bans farmers from saving seeds”.

At this point, a mere FIVE companies – biotechnology companies at that — own the vast majority of all worldwide seeds. The enormous ramifications of this should be fairly obvious.

Genetically modified (GM) seeds, particularly corn and soy, have already taken over in many areas of the world, effectively eliminating the use of conventional and “heirloom” seeds, and along with them, the ancient, sustainable farming practices that produces healthful food.

Many pro-GM crop fanatics argue that genetically engineered (GM) crops are superior in a number of ways, but evidence to the contrary is all around us…

The illustration below, provided by The Ecologist, shows how five biotech giants have gobbled up seed companies, large and small alike, across the world, with Monsanto clearly leading the pack. 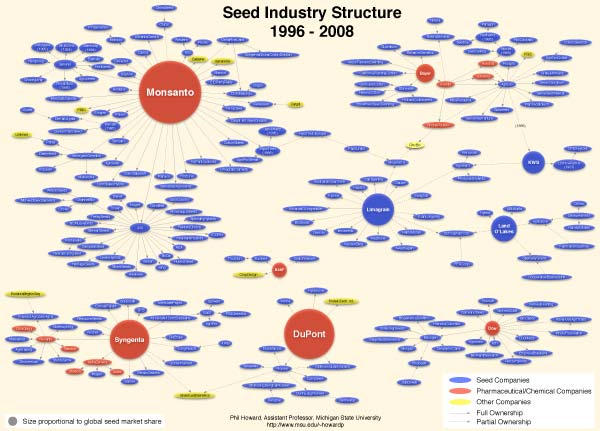 Since the 1980s, Monsanto has become the world leader in genetic modification of seeds and has won at least 674 biotechnology patents, more than any other company.

This is not surprising, considering they invest over $2 million a day on research and development!

But Monsanto is not only patenting their own GMO seeds. They have also succeeded in slapping patents on a large number of common crop seeds, in essence patenting life forms for the first time — without a single vote of the people or Congress.

By doing this, Monsanto has become the sole owner of many of the very seeds necessary to support the world’s food supply … an incredibly powerful position that no for-profit company should ever hold.

The other heavyweights are Syngenta, Bayer, Dow, and DuPont.

Combined, they have acquired more than 200 seed companies in the past 15 years. And together, they not only threaten the continuation of sustainable, renewable farming practices, their monopoly over the food supply threatens the health of every single person on the planet.

The Impact of GM Seed Monopoly

Farmers are now increasingly forced to use GM seeds simply because there are so few alternative sources of seeds remaining. The effect of this is that we’re losing renewable agriculture – the age-old practice of saving and replanting seeds from one harvest to the next.

As mentioned in The Ecologist, one solution to this growing problem would be to make patenting seeds, plants, and genes illegal. As it stands now, each GM seed is patented and sold under exclusive rights.  Therefore, farmers must purchase the GM seeds anew each year, because saving seeds is considered to be patent infringement. Anyone who does save GM seeds must pay a license fee to actually re-sow them.

This, of course, results in higher prices and reduced product options.

Add in the increased need for pesticides and herbicides that GM crops require and the ever rising cost of these products, and what you end up with is a far more expensive crop that has the potential to not only fail more frequently than conventional crops, but that can also be extremely harmful to the animals and humans who eat them.

(For more information about the health hazards involved, please see What You Must Know About Dangerous Genetically Modified Foods.)

Talk about a lose-lose-lose situation.

Two years ago, 400 scientists from around the world created a report that shows how seed and plant patents are increasing, as opposed to reducing, costs as promised. For example, between 1996, when GE seeds were introduced to the market, and 2007, the price for soy and corn seeds doubled.

But the price farmers pay for using GM seeds do not end there.

Heartbreaking proof of the devastating effect of this agricultural change can be seen in the skyrocketing suicide rate in India, where rising debt combined with frequent GM crop failures bring farmers to the brink of despair on a daily basis.

Africa has also been negatively impacted by GM crops.

SeattleGlobalJustice.org recently reported that “in 2009, Monsanto’s genetically modified maize failed to produce kernels and hundreds of farmers were devastated. According to Mariam Mayet, environmental attorney and director of the Africa Centre for Biosafety in Johannesburg, some farmers suffered up to an 80 percent crop failure.”

GM crops were brought to market with the promise of higher yields, lower costs, and reduced pesticide use. None of them have turned out to be true…

On the contrary, GM soya has decreased yields by up to 20 percent compared with non-GM soya, for example, and up to 100 percent failures of Bt cotton have been recorded in India.

In the US, studies by scientists from the USDA and the University of Georgia has shown that growing GM cotton can result in a drop in income by up to 40 percent.

As for pesticide use, USDA data shows that GM crops has increased pesticide use by 50 million pounds from 1996 to 2003 in the U.S., and the use of glyphosate went up more than 15-fold between 1994 and 2005, along with increases in other herbicides to cope with rising glyphosate resistant superweeds.

Not only that, we now have confirmed transgene contamination in the wild.

Although Monsanto and others denied this possibility, this was long ago predicted and precisely what one would  expect.

Scientists have recently confirmed that the genome (whether plant, animal or human) is NOT constant and static, which is thescientific base for genetic engineering of plants and animals. Instead, geneticists have discovered that the genome is remarkably dynamic and changeable, constantly ‘conversing’ and adapting to the environment.

In reality, GM crops are a scientific experiment based on flawed assumptions, and anything is possible – and I can strongly guarantee you, it isn’t good, and it won’t get any better.

The report, ‘Future of seeds and food‘, published last year by the international coalition of No Patents on Seeds, calls out for an end to patenting seeds, plants, and animals, and the need to stop the food monopoly created by Big Biotech. And I agree, little could be more important at this point in time.

There are already clear indications that unless the GM seed monopoly is put to an end, our whole ENTIRE food supply will become contaminated, putting everyone’s health at risk.

Many conventional and organic livestock farmers alike are now being forced to use GM feed, simply because there are no other options available!

Situation is Actually Worse than We Knew

Not only do we have the problems that have been previously discussed over the years with GM crops but there are some new elements to the equation. For now even those that are convinced of the dangers of GMO crops and want to avoid using them simply are unable to in some cases.

I recently received a personal letter from one such farmer, who runs a small ecological farm in Ohio. Even though she is dedicated to organic farming, she is now finding herself in the unthinkable predicament of being forced to buy Monsanto GM corn feed for her pigs and chickens.

Here is her story: 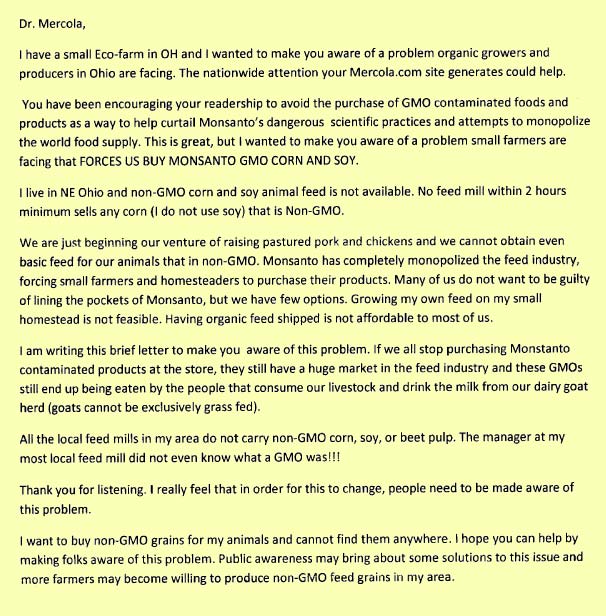 Be Part of the Solution

In spite of what you have likely heard, a large shift to organic agriculture — which by definition is non-GM — could protect and improve both the environment and animal- and human health.

It could even be the solution to world hunger. According to a Danish study presented to the U.N. in 2007, recent models of an organically grown, global food supply shows that a more environmentally friendly approach to agriculture is in fact capable of producing enough food for the world’s current population.

What prevents many farmers from making the move to organic is that crop yields could initially drop as much as 50 percent in the very beginning, before evening out over time. However, that problem may be mitigated somewhat, because farmers wouldn’t need to dole out precious money for toxic pesticides, the price of which have risen as much as 75 percent already.

Unfortunately, while we’re waiting for the leaders of the world to catch up and realize the dire straits we’re in as a species, we’re running out of time. As evidenced by Cappello’s story above, our ability to produce organic foods is under constant attack.

So, please, do not wait for some unspecified time in the future.

Instead, do what you can NOW to promote local organic food producers no matter where you live by taking advantage of local sources of organic foods as often as you can.

In addition, please take every measure you can to avoid as many GM foods as you possibly can. Here’s a list of tips to help you do just that:

Avoid purchasing Monsanto-made pesticides and herbicides for your home